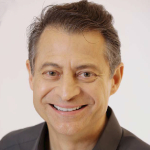 Fortune Magazine recently named Peter Diamandis as one of the World’s 50 Greatest Leaders.

Diamandis is the Founder & Executive Chairman of the XPRIZE Foundation, which leads the world in designing and operating large-scale incentive competitions. He is also the Executive Founder and Director of Singularity University; a global learning and innovation community using exponential technologies to tackle the world’s biggest challenges and build a better future for all.

As an entrepreneur, Diamandis has started over 20 companies in the areas of longevity, space, venture capital, and education. He is also cofounder of BOLD Capital Partners, a venture fund with $250M investing in exponential technologies.

Diamandis is a New York Times Bestselling author of two books: Abundance & BOLD. He earned degrees in Molecular Genetics and Aerospace Engineering from MIT and holds an M.D. from Harvard Medical School.

Peter’s favorite saying is “the best way to predict the future is to create it yourself.”

10:00 AM WORLD-CHANGING KEYNOTE SPEAKER: Abundance is Our Future

Check out the incredible speaker line-up to see who will be joining Peter H..