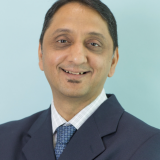 Huned was born in Pune, India. He attended the University of Poona, India, and graduated with a Bachelor of Commerce degree in 1991. He received his Masters in Computer Management degree from the University of Poona in 1993. He then went to pursue his education in Australia and completed his MBA from Queensland University of Technology - Brisbane, Australia in 1995. Huned joined General Electric in 1995 as Collections Manager at Countrywide Consumer Finance in Pune, India. He was selected to join the Corporate Audit Staff in 1997 and completed various assignments in Asia, Europe and the US. In 2000 he joined GE Money in Stamford, CT as Senior Analyst, FP&A. In 2002 he was appointed Finance Manager for Technology/Enabling for GE Money. In 2004 he moved to Burbank, CA as FP&A leader for GE Capital WMC Mortgage. He joined GE Capital Sales finance in 2006 as CFO for Home, Power & Recreation products in St. Paul, MN. He moved to Kettering, OH as FP&A Leader for Sales Finance in 2009. Huned took an international assignment and moved to Dubai in 2011 as Global Operations Finance leader, and expanded into his current role in 2014. He is a Senior Executive and currently manages Global Operations across MENAT and SSA which spans multi-function shared service operations across 55+ countries, and also manages the all-women Shared Services center in Riyadh, Saudi Arabia. Huned is married to Zaahra and they have 2 boys, aged 10 and 14. In his leisure, Huned enjoys traveling and spending time with his boys.

Check out the incredible speaker line-up to see who will be joining Huned .

9:30 AM KEYNOTE ADDRESS: The value of Shared Services - A GE perspective

*Processing your payment may take a moment. Please click submit payment only once, and do not refresh this page. Doing so may result in your credit card being charged more than once.