How To Become A Better Manager: Six Peter F. Drucker Questions Every Manager Must Ask

1976 and a Night at the Claremont Graduate School (CGS)

I had driven the San Bernardino Freeway from my office on 6th and Flower Streets in downtown Los Angeles after work, a one to two hour drive depending on traffic, to attend the Claremont Graduate School Ph.D. in Executive Management Program (now the Peter F. Drucker Graduate School of Management).

The previous year I had graduated from the Pepperdine University MBA Program and now almost 40 years old and working full time, decided I was wasting my time sitting on the couch watching football games when I used to be reading and studying and so decided to go for a doctorate.

After checking on the UCLA and USC programs I decided they were not for me since they wanted me to give up my life and become a full time student, something that would be impossible to do since I was paying on a mortgage for a home on the Anaheim Hills Golf Course with a new cherry red 450 MBZ in the garage.

The Department Chair at Cal State University - Fullerton, where I was teaching part time in the evenings, suggested I try CGS. He said they had a new guy there from NYU by the name of Peter Drucker that I might find interesting - needless to say an understatement.

Peter Drucker on "Why I Don't Teach Long Range Planning"

I applied to CGS and part of the application process was an interview with the Dean of the School, Paul Albrecht, who was also the brains that enticed Drucker to leave NYU and join CGS. Albrecht asked me why I wanted a Ph.D., and I replied that "I wanted to continue learning in order that I could make a contribution to my organization."

He liked my answer and accepted me into the program saying that, if I had said I wanted the Ph.D. in order to teach he would have rejected my application.

While at CGS I had the fortunate experience of getting to know Peter Drucker (known as the Father of Modern Management) first as a student, then a colleague, as we worked together on planning the integration of the second largest merger in U.S. history at the time, and as a personal friend for nearly 30 years until his death in 2005 at the age of 95.

In fact, it was because of this relationship that many years later working with Peter it took me to China to develop and teach the Peter F. Drucker MBA Program for China (PRC).

One year I returned from China to review my progress in developing the program with Peter and after having lunch at his favorite Viennese restaurant I was driving him to his home near the university.

It was a modest home and I asked Peter, "How long have you lived here?" Drucker replied, " Thirty years. I came out here from NYU to teach a summer workshop series and never went back. That's why I don't teach long range planning."

I, too should not teach long range planning as I ended up living and spending ten years in China during the most exciting period of the "New China's" growth.

For those not familiar with Drucker, over a period of 65 years he wrote 39 books and thousands of articles for many publications including the Economist, Harvard Business Review, and the Wall Street Journal among others.

He completed his last book shortly before he passed away in 2005 and to this day I consider that amazing as here I am nearly 80 years old and often find it difficult to get the time and energy to write.

It is also interesting to note that he did all of his writing on an electric typewriter in his den at home. He had no office or secretary to help him. He was also known as a consultant to many organizations throughout the world which he admitted gave him great insight for his books.

Questions to Ask as a Manager - The Six Key Areas

Many years ago, I attended a lecture Peter Drucker delivered on management and what managers do. Here he cited six key areas where managers need to ask questions (knowing the right questions to ask was a theme of Drucker's strategic thinking approach—it’s as applicable today as it was in 1976). The following are my notes from this lecture.

There are many textbook definitions of what managers are supposed to do, but perhaps one of the more pragmatic definitions is the one by Drucker: "A manager is paid to enable those people who are able and capable of work to earn their wage and not hinder them in the process."

Along this line, Drucker pointed out that people know they are on the payroll to get work out. They respect this, and they also want to respect the company and manager they work for.

When people are not allowed to do the work they are paid for, they lose respect. (A more recent study reinforces this concept, concluding that people do not leave organizations, they leave bad bosses.)

1. Performance of Your People

Drucker suggested the first thing you can do as a manager is ask the following questions that deal with the performance of your people:

When you have identified what "helps," provide them with more.

When you have identified what "hinders," remove it.  Don’t speculate and assume you know what hinders your employees the most—ask them.

No matter what the demand for time, there is no more supply—it is a perishable resource. Investigate to see if you are taking time from your people by making them do things they are really not paid to do.

For another great Drucker example on the importance of productivity improvement, read Surveys Produce Jaw-Dropping Gains in Knowledge and Service Worker Productivity

2. Taking Responsibility for Your Relationship with Others

This can be done by asking the following questions:

When you have answered these questions, take the responsibility for establishing and maintaining the relationship. It should be no surprise to find many of these relationships are with your counterparts in other functional areas.

He added that it would also be helpful to keep in mind you are responsible for the work of other people, not just subordinates. This includes yourself, your manager, your peers, and finally your subordinates—in order of the easiest to control to the most difficult to control.

3. Establishing and Maintaining Your Relationships with Others

This logically leads to the third area: establishing and maintaining these relationships. It can be summarized by a very simple Drucker Rule:

"Don't ever assume there are mind readers at work."

In support of this rule Drucker also added:

"There is no such thing as a communication problem–you have not told them and furthermore, assumed they understood."

Drucker stressed that you can't assume the people you deal with don't need to know—take responsibility by keeping them informed and let them make the decision whether they need to know.

People do not trust things they do not understand, so make sure they understand.

The fourth area you should investigate by asking the next series of questions:

When you have answered these questions, take the responsibility for the results and contribution, and demand the same of everyone who reports to you.

After you have accomplished this, appraise the results of your people, don't judge. Drucker emphasized:

"Your job is not to judge people, but to get them to perform."

With respect to this analysis or appraisal, don't let effort absorb you. Remind yourself of why it is done and what the result is supposed to be.

5.  Relationship with Your Manager

The fifth area to explore closely corresponds to relationships. specifically the relationship you have with your manager. In this regard, it would be helpful to ask him/her the following questions:

When you have answers to these questions, establish a priority list of what must be done, and begin by concentrating on the first thing on your list.

When you have completed the first thing, don't go on to number two on the list, but rather make another priority list. You may find number two is still number two, replaced by something more critical.

The sixth and final area is assignment control, which traditional management texts describe as staffing. Every six months, make a list of the people who report to you and what they deliver and produce. Then ask the question:

• Are they assigned where the results are?

If they are not assigned where there is a demand for results, they are being misallocated. Drucker stated:

"Plans fail because you don't allocate an individual who can perform."

If you identify an opportunity in your plan which can be exploited, it should be staffed with people who can deliver.

In terms of making this list, don't get confused between performance and potential. If you have someone on the list that has potential, ask what he/she had done? Don't be misled by people who have high potential but don't deliver. Look for low potential people who can perform.

Drucker expanded on this idea by suggesting that, "Low potential people have learned to perform, to do honest work and not to fail because they are not bright enough to improvise."

Finally, Drucker cautioned about leaving high performing people assigned to the problem areas too long, for it is a poor use of them. Assigning the best sales person to move the dead products may be an honest and respectable goal, but in Drucker’s view it is hard work, useless, and the quickest way to create a market for competition.

When you have completed this analysis, you may want to ask yourself one more question: When I leave this organization, what will be different because I was there?

Drucker concluded the lecture at 10:00 PM and I was back on the Pomona freeway to Anaheim Hills.

Join us for a panel discussion with industry leaders as they share their experience on the journey t...
MORE WEBINARS

Shared Services in the Not for Profit (NFP) Sector – a Missed Opportunity?
2017-09-28
By Mary Sue Rogers 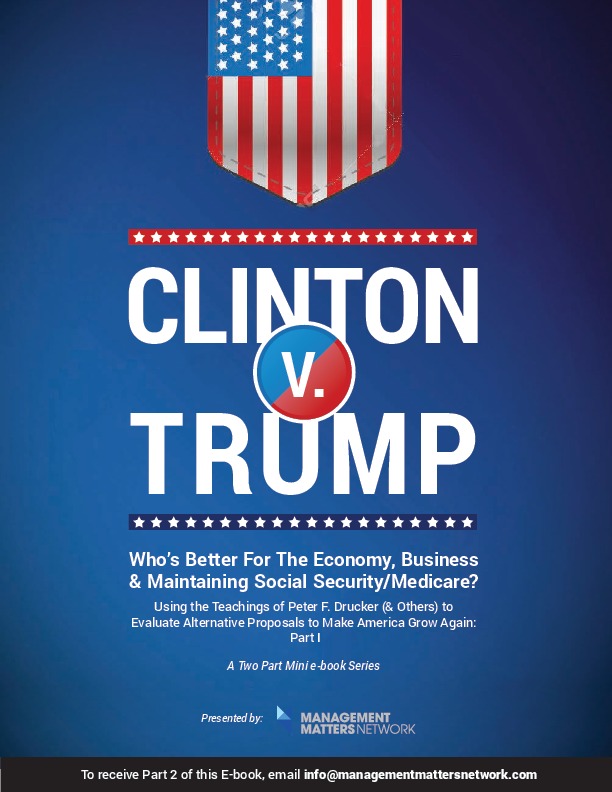 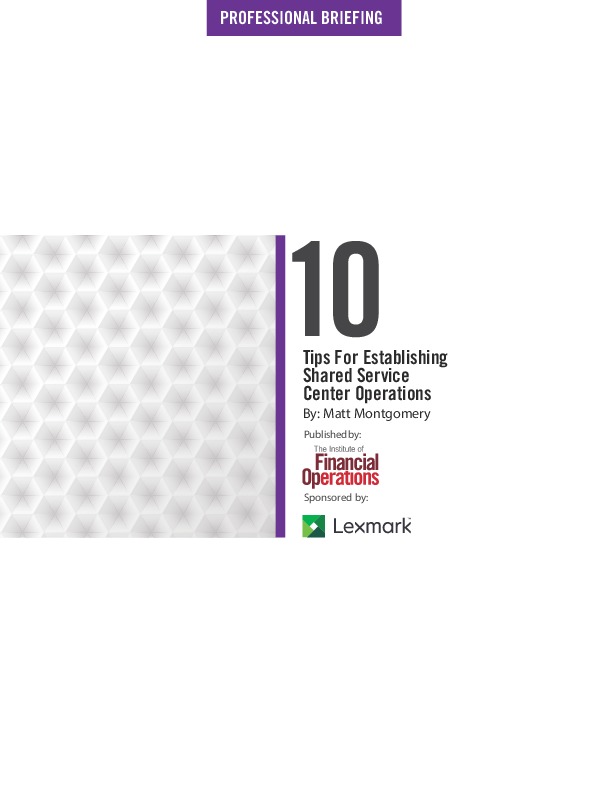 How to Choose the Right Location: 7 of the Most Important Factors to Consider
2015-07-01